originally published as a guest editorial in the Tucson Citizen, Nov 10, 1992

Darryl Cherney is an Earth First! activist who visited Tucson recently.  He’s also been the victim of a car-bomb assassination attempt on the life of his friend and fellow activist, Judi Bari.

Cherney’s message to his audiences during his Tucson visit is that the backlash against non-violent environmentalists is deadly serious.

Cherney has often been called the Woody Guthrie of the environmental movement, because he travels the country singing songs for local environmental issues.  His real song-writing hero, though, is Joe Hill, the labor union organizer and early target of the FBI, who was eventually put to death by the state of Utah.

Cherney says he is afraid, though without the usual seriousness one might expect.  “There’s an old Aesop’s fable,” he says.  “A drummer is captured by enemy troops who are going to execute him, and he says, ‘Don’t kill me!  I’m just a drummer.  I don’t go out and shoot anybody.’  And they say, ‘Are you kidding? We’re going to kill you first because you’re the person who gives inspiration to the soldiers to go out and fight for the cause.’”

Cherney just finished a national tour visiting activists from the East Coast to the West, including Tucson, singing and speaking on a variety of topics including environmental destruction, corporate lies and harassment of activists by the FBI and local police departments.

He used his experience of the bombing to describe how the FBI is repeating operations used against the early radical labor movement, the American Indian Movement, Black Panthers, Sanctuary movement, and now against environmental activists.

Prior to the bombing, he and Bari were doing what has long brought on the wrath of corporations – forging links between labor and environmental interests.  Bari, an effective and experienced labor organizer and organizer of Redwood Summer, was helping workers and environmentalists see their common interests.  Cherney had written a song called “Potter Valley Mill,” which accomplished the same thing and was, for weeks, the number one requested song on the local radio station in the timber community.

When Bari, whose work of 20 years has been completely non-violent and within the law, began receiving death threats, the Oakland Police refused to take interest.  “When you turn up dead, Judi, we’ll investigate.”  Then her car was rammed, sending it into the air and slamming it into another vehicle which was pushed up a flight of stairs, totaling her car.  She, Cherney, another activist and four children were miraculously not hurt badly, and they could identify the truck as one they had blockaded the day before.  But the police refused to investigate.

Bari argued publicly that they were giving vigilantes a green light to continue deadly threats.  “You brought it on yourself,” was a City Council member’s response.

Then the bombing occurred.  The pipe bomb, placed under the driver’s seat, should have killed her, but it exploded out one end, blowing a huge hole in her car floor.  The FBI promptly removed the front seats and driver’s side door “for investigation,” then claimed the bomb has been in the back seat, making Bari the prime suspect.  She and Cherney were placed under arrest while Bari was 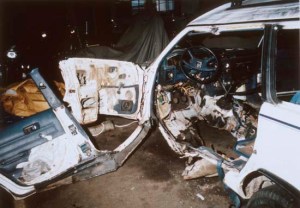 Bari, who’s learning to walk again, and Cherney are currently suing the FBI and Oakland Police for failure to investigate their bombing, destruction of evidence, impeding an investigation, false arrest, slander and more.  The court recently ruled they have a case.

For six weeks, the FBI released false information about “evidence” purporting to show that Bari and Cherney were the bomb makers, but every bit of that “evidence” has since been retracted by the FBI.  The psychological damage was done, however, and their credibility in the community damaged.  Further, the FBI has made no progress in investigating the real bomber.

Cherney and Bari’s experience is the most extreme but not unique among environmentalists.  In Tucson, Mount Graham activists are currently suffering spurious arrests.  At a recent rally and protest, a Tucson police officer who had arrested an activist the day before was discovered pretending to be a protester when a semi-automatic weapon with laser scope fell out of his backpack.  Last year, as Native Americans were gathering in Tucson for a national conference on sacred sites, including Mount Graham, university police showed off for the evening news their newly equipped SWAT-trained police force.

Cherny’s response to the threats against his life go beyond his own life.  “I’m much more afraid of what industrial civilization is doing to this planet, what multinationals have in store for us with the ozone layer, the warming of the planet with the greenhouse effect, deforestation, the draining of our lakes and destruction of our rivers, the overgrazing of the prairies.  These are the things that will ultimately murder us all.”

The founders of America predicted we would need to be always vigilant to protect our civil rights.  We are living in troubled times, certainly, and police and FBI oppression is not the answer.

Judi Bari was a single mother with two children, 4 and 9, when she suffered the assassination attempt.  Seven years later, she died of breast cancer.  Darryl labored on for another five years, raising money and working with the lawyers to bring their trial to court.  In June, 2002, the 6-week trial resulted in a historic victory:  a raft of guilty charges against the FBI and Oakland Police and a verdict of $4.4 million.

I was a member of the 4-person media team, working full-time to get details of the trial daily to the nation’s media.  The story was blacked out, except in California.  All the media, who’d already published the lies about Judi and Darryl being the FBI’s “only suspects” refused to print the truth.  After the verdict, single paragraphs were buried in back pages of the major national media.  For more information, see http://www.judibari.org.