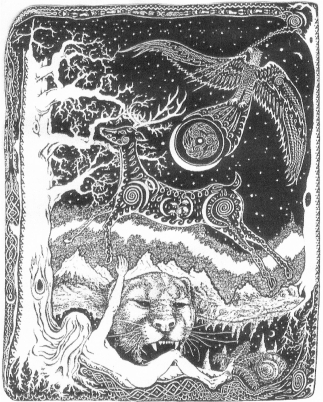 I’m not looking forward to dying, but when I go, I’d prefer it be by mountain lion.

Death should be a last experience of life, not one more of technology, whether fast as in a car crash, or slow as in needles and tubes, monitors beeping and motors keeping organs alive for years.

No, I can think of no better way to go than knowing I am at that very moment sustaining the life of another living being, especially one as beautiful as a mountain lion.

Too many in my family have died of Alzheimer’s Disease.  My grandmother I watched go for a full fifteen years, the last ten of which she seemed to have no recognition of sound or movement or her very own life, much less recognition of her family and our caring for her.  None in my family want this to be our fate, yet we wonder:  How do we help another dodge the law to achieve our break from a mindless “life”?

I have notified my family that if the time comes I am like my grandmother, or otherwise unable to respond to others and care for myself, I want to go on a “vision quest.”  I may not have that understanding then, but they may tell the authorities with conviction that that is indeed what I demanded.

They are to take me deep into whatever mountain range is convenient and help me to the highest possible place, far off the trail, within the mountain lion’s seasonal habitat.  There we may have a ceremony.  They may hug me, wish me a good journey, and go away.  Leave me no food, no shoes.  I do want a good sleeping bag, since at this moment I cannot imagine tolerating the cold (allow me this idiosyncrasy as another last request), but leave me no tent.

If you want, you may return in two weeks or so to gather my remains, or simply verify that I am gone.  But you are not to come back sooner or try to change my course.

I may die of cold or starvation or even a fall, should I be ambulatory and try to move around.  But the most glorious way to die, if I am lucky, will be by major predator – such as the mountain lion.

Few of us have had the pleasure of seeing a mountain lion in the wild, even though the animal used to have the largest range of any native mammal in the western hemisphere.  Also known as cougars, it is the second largest cat in North America, second only slightly to the jaguar.  Despite its size and weight, it moves with rolling grace, with hardly a sound. Stalking its prey, it often approaches very close before charging swiftly to make a kill.  The attack is made toward the head, to break the animal’s neck.

Mountain lions do not usually attack human beings, especially if deer, their favorite food, is available.  But if a human being were an easy target, such as myself, then there is no reason to believe the mountain lion would not take advantage, as most predators are also opportunists by nature.

If I had any awareness of myself and my surroundings, I believe the pain of the attack would be easily outweighed by the thrill.  Perhaps I would be surprised as, in a flash, a lion would be at my neck.  Or maybe, despite failing faculties, my senses would come alive in the solitude and silence of the wilderness, and I would smell and hear as sensitively as wild things.

Sitting or lying quietly, I might hear the cat from a distance pause, then slowly approach, pads settling softly on the forest duff, its breathing intermixed with the breeze.

Then the charge.  In the silent blink of an eye, the huge body would be at mine.   One-hundred fifty pounds of warm fur, perfect muscle, not breath and bounding hunger.  If I am lucky, I will see its eyes, intent, without malice, about the deed it must do for every meal.  It has been a killer since its fluffy spotted babyhood.

The house cat I tried as a child to cuddle, too aloof, resisting, would be upon me now with a vengeance.  Soft fur, and warmth, its weight would surprise me.  And its teeth would sink with perfection, consummating our exchange.

Before the warm rush of blood which would make me cold if I could feel another minute, I would perhaps inhale the big cat’s breath.  In adrenalized alarm, I would gasp as the big cat, in exertion, exhaled its hot breath, sweet, rich, but not with the oxygen I would otherwise need – rich in wildness.

Before it broke my neck, perhaps a low sound would emerge from deep in the cat to my ear, anticipating its satiation.  Fur on my neck, like a lover, almost purring.  Claws embracing.  Its stomach even then churning chemicals to make me part of it. 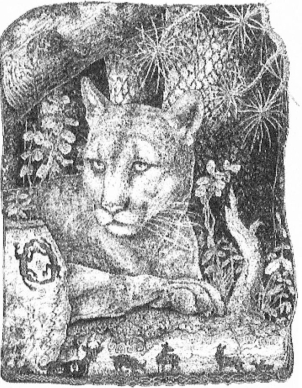 ts heart would beat calmly then, after mine had ceased, slow and steady, sixty beats per minute, as the owner licked its paws and cleaned its face and departed to nap, as it has for thousands of years.

(Interesting note:  Asante and I each produced our art and writing in 1987, though we wouldn’t know each other or begin our collaborations until 2003.)